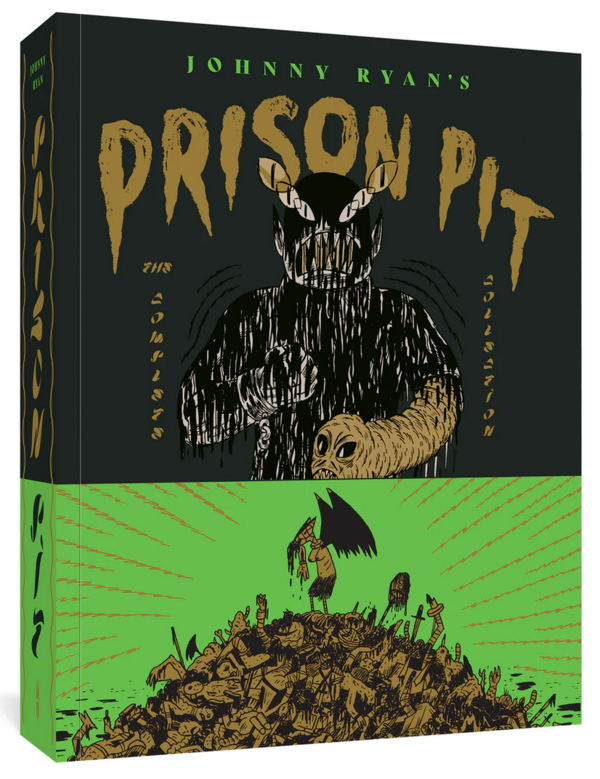 This filthy meat-grinder of a comics battle royale is collected in one massive volume, now in paperback!

Prison Pit is a planet full of repugnant intergalactic criminals, drug-filled slugs, and now Cannibal F***face (CF). From 2009 to 2018, the crudely manic pen and mind of Johnny Ryan documented mayhem and mutation, as CF loses his arm to a vile beast, replaces it with a symbiotic bug that gives him a steroid-like jolt, and seeks grisly revenge against any and all creatures. To find his way out he must do battle with his archenemy, Slitt, the only one who knows how to escape the hellscape they inhabit. Finally, CF is pitted against the very system that shaped him into the avatar of death and destruction he has become.

Originally collected in hardcover in 2020 at the height of the pandemic, Prison Pit: The Complete Collection sold out immediately and fans have been clamoring for a mass market paperback ever since. Combining Ryan's love for WWE wrestling, Gary Panter's Jimbo comics, Kentaro Miura's Berserk, and other influences into a brutal showcase of violence, survival, and revenge, this hilarious, all-original fantasy is for anyone who's ever wielded a plus-five vorpal blade, lost an afternoon to World of Warcraft, devoured a stack of seinen manga, or cheered when a colorfully costumed villain leaped into the ring to beat someone down with a chair. A funny, filthy, epic sci-fi odyssey, The Complete Prison Pit is a masterclass in comics storytelling and has earned a place in the comics canon.